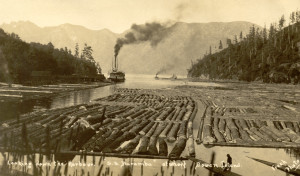 Large tract logging began in 1885 with Joseph Mannion who intended on logging his 850 acre property at Tunstall Bay. The following year his plans changed and thus sold his large property to John Kerr, who in turn sold it to a big Chemanius company, Croft and Angus in 1887. Bowen Island was a convenient location for Croft and Angus who were supplying lumber for the east coast of Vancouver Island, as well as for the construction of the Esquimalt and Nanaimo railway. Two years later, Victoria Lumber and Manufacturing Company, which was owned mainly by American investors, took over and by 1899 had doubled its capacity. Afterwards, Joseph Chew Lumber and Shingle Manufacturing Company were owners of the property for two years before finally selling it to Western Explosives Limited in 1909.

Logging took place on other parts of the island as well. Jacob Dorman pre-empted district lot 1348 in 1890 and sold it to Royal City Planning three years later. Near 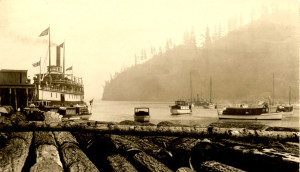 Terminal Steam Navigation Co. steamer “Baramba” at Bowen Island Wharf with log boom in foreground and boats at anchor to the right. ca.1910

Grafton Lake, BC Mills and Trading (formerly Hastings Mill) logged the property before selling it to the Union Steamships Company.

Bowen Islanders worked at various logging camps as swampers (people who trim felled trees into logs), barkers (people who remove bark from the tree) and sawfilers (people who maintain and repair saws in the saw mill). These jobs often saw workers being paid $2.00 a day, but if one were a skidroad boss, teamster or faller, one might earn $2.50 a day. There was one unpopular job in the a logging camp-  greaser. A greasers job was to grease rough skid roads with fish oil to passage logs smoother. Naturally, the greaser often was sprayed with fish oil while on duty and smelled so strongly that he was forced to live in a small cabin all by himself. 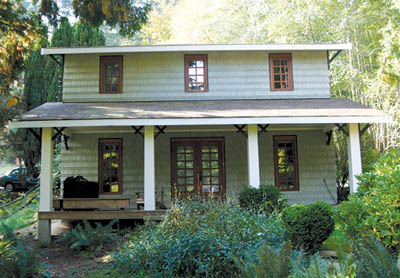 Admission is by donation