Bluewater Park is on the west side of Bowen Island, adjoining King Edward Bay Estates on its southern perimeter and with crown land to its north. Its 160 acres were pre-empted from the crown in 1892 by an unknown individual. The next records show that in 1910, mineral rights were purchased by John Thompson who built a cabin and wharf. He brought ore out via horseback from the 1200’ level of Mount Gardner and shipped it from a spot later called Byers Beach.

A logging truck with a large log on its flatbed. ca 1950

In 1910, Samuel Byers bought the property and began to log it. As there was no road access to the property, Byers found that Thompson’s wharf was his only means of receiving visitors. Byers continued to log the property and use it for mining access until selling to G.N.R. Timber in 1957. The company consisted of Jack Greenwood, Ernie Naud and Pat Reynolds. Naud was a retired logging operator who knew Bowen from having hunted for deer and grouse in the 1920s. Several business changes later, Naud became the sole owner of Eddy Holdings Ltd, paying off the other directors with Bluewater lots. In 1958, Naud received certification for a subdivision of the property. The original subdivision called for 31 lots at the northerly end of the property so he barged a caterpillar tractor and pick up truck to Snug Cove and drove them to the edge of District Lot 1545 (King Edward Bay) and then pushed Windjammer Road 1 ½ miles through the property. In 1959 further subdivision added 19 lots. 28 more were added in 1961 with 8 more lots added eventually. Captain’s Way, the main waterfront road in Bluewater was subdivided after 1964.

Naud rented the Malkin upper house in King Edward Bay for more than 9 years. Because he was between wives, he lived the life of a sociable logging bachelor. During his stay, the cottage bedrooms stored logging chokers and a multitude of equipment, old vehicles and parts. Naud was a bit of an entrepreneur. He purchased a radio controlled logging unit to facilitate his logging. In 1964, he planned to develop a full-blown resort on and around the Clipper Place property. Called the Bluewater Park Marina and Motel, the original drawings done by architect Paul D. Smith show a 50-unit motel with swimming pools, marina, breakwater and tennis courts. (It seems apparent by the gentle slope portrayed in the drawing that Smith had never been to Bluewater.) 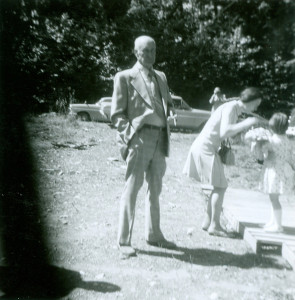 Naud continued to develop Bluewater. Other roads were added, especially Captain’s Way and Clipper Place. During this time, Ernie and his wife Agnes lived in a number of locations in Bluewater before moving off island for a few years. They returned with a doublewide trailer but since Ernie liked the water, he built a home at the bottom of Clipper Place. Agnes Naud was a strong force in the Bowen community: she was a major factor in the development of the fire hall and ambulance service. As well, she was active in the Gardening Club, the Historians and the Legion. Ernie died in 1985 and Agnes moved to North Vancouver. Shirley Menzies, Ernie’s daughter by an earlier marriage, inherited a number of Bluewater properties.